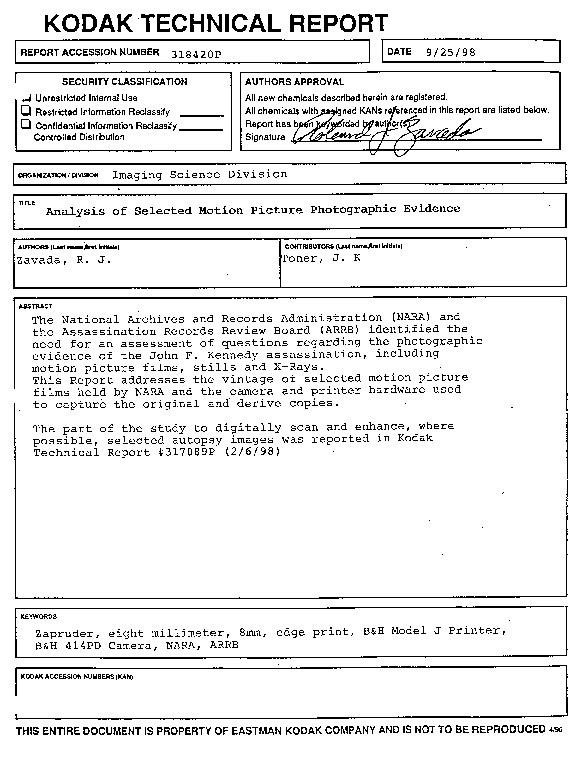 BACKGROUND: The Assassination Records Review Board first met with the Eastman Kodak Company in June, 1996, in Washington to discuss a wide variety of possible research topics related to a host of potential film issues. At that time, Kodak stated that it would provide a limited amount of pro bono work for the Review Board. The Review Board continued discussions with Kodak laboratory officials based in Rochester, New York, and subsequently met with Kodak technical experts James Milch and Roland Zavada in Washington, D.C. At that meeting, the Review Board identified three major areas of interest, only one of which related to the Zapruder film:

(2) the possible enhancement and, if necessary, optical (i.e., film, not medical) analysis of autopsy images; and

(3) a study of the provenance of film materials subpoenaed by the Review Board from Robert J. Groden for examination.

Kodak laboratory experts Milch and Zavada viewed the original Zapruder film, a Secret Service first generation copy, and some of the Groden materials for the first time at NARA during their September, 1996 visit to Washington.

Kodak subsequently offered to contribute up to $20,000 of labor and materials to the Review Board in pro bono work - the equivalent of roughly 35 days of effort. Kodak confirmed, at a meeting with the Review Board in August of 1997, that Zavada, a retired Kodak film chemist who was formerly Kodak's pre-eminent 8 mm film expert, was the consultant that Kodak had hired to:

(2) explain the relationship, if any, between the camera's operating characteristics and perceived "anomalies" in the original film; and

In addition, in August 1997 James K. Toner, the Laboratory Head of Kodak's Imaging Science Resources Lab in Rochester, presented a methodology for making the best possible direct digitization of the original Zapruder film. Kodak also began to make arrangements with NARA and the Review Board for the digital preservation and enhancement of the autopsy images of President Kennedy, under the direct guidance of Toner.

In September 1997, Toner and Zavada visited Washington and, in addition to studying selected autopsy film and x-ray images at NARA, they also studied perceived anomalies in the inter-sprocket areas of the original Zapruder film, and the emulsion characteristics and edge print characteristics of what NARA presumed to be the camera-original Zapruder film and the two Secret Service first generation copies. (See the 3 illustrations on page 121 [omitted here].) Following this visit, Zavada began writing his extensive report on Zapruder film issues, which expanded in scope as his research into camera optics and printer characteristics continued. This report was scheduled for completion by Kodak no later than September 30, 1998; six copies were scheduled for deposit at NARA in the JFK Collection.

Kodak ultimately spent approximately $53,000 on work related to the digitization and enhancement of the President's autopsy images, and approximately $11,000 on work related to Zapruder film issues, significantly exceeding its original estimate of donated labor and materials. The Review Board gratefully acknowledges the public service provided to the American people by the Eastman Kodak Company.

(From the Final Report of the Assassination Records Review Board (ARRB)). The ARRB's Final Report is , or you can download this 260Kb .ZIP file and view offline. Please un-ZIP it to its own DIRectory on your system, and use its "index2.html" as your starting page.

The Zavada Report is offered here as Adobe .PDF files.
If you don't already have Adobe Acrobat Reader™ installed on your system,
click on the Adobe button above. Reader™ is a free program,
and you can view and print .PDF files you find on the Web with it.
Here's Adobe's page.

What Cameras Were Used for Testing?