Go to .
In the course of his testimony at the O. J. Simpson civil trial, Robert Groden was forced to testify that:


-he was a high school dropout who never took or taught a photographic course;

-he had suffered several strokes and his memory had been impaired because of them;

-nearly all of his professional life has been dedicated to investigating the conspiracy surrounding the assassination of John F. Kennedy;

-his JFK-related work included narrating a Dallas tourist attraction in which people are driven along the Kennedy motorcade route in a vintage limousine;

-he doesn't belong to a single professional group dedicated to authenticating photographs - and he doesn't even know the names of any such groups;

-he is being sued by somebody for allegedly using their video footage without permission in a videotape Groden has been selling on the street; and

-he sold Kennedy autopsy pictures to the Globe tabloid, along with his insight, for $50,000.

What does all this mean? Are we to dismiss Groden's entire body of work on the JFK assassination as unreliable? Do we welcome him in the research community? Should we buy his wares as he sells them in Dealey Plaza?

Of course Robert has been invaluable to the JFK assassination research community. But why in the world would he jeopardize his reputation and subject himself to scrutiny at the hands of these attorneys? What "friends" would let Robert appear in this unfriendly forum so unprepared?

Here are the three sessions of Groden testimony in the Simpson civil trial, in their entirety.


Day One - December 18. Includes the 402 hearing on Groden's qualifications. 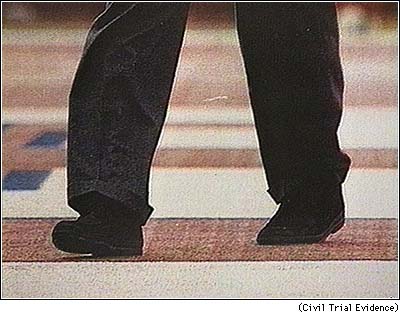