A First-Timer's Visit to Dallas 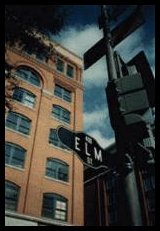 "I wish I had your perspective, Clint. I wish I were in your shoes."


I was taken aback. Mystified. JFK Historian/Researcher Ian Griggs (Contributing Editor from the UK for the Assassination Chronicles, and Secretary of Dealey Plaza UK) had just picked me up from the Dallas/Fort Worth Airport, and we were headed towards Ruth Paine's and Wesley Frazier's residences for a drive-by.

Sensing my bewilderment, Ian turned towards me and continued:

"I wish I were seeing Dealey Plaza again for the first time, Clint. To feel those emotions all over again."

Those emotions include awe, anger, and sadness.

And I do not feel they will ever go away.

This Wednesday marks the 32nd anniversary of the assassination of JFK. Now, the Sixth Floor Museum chronicling the event is so popular that it is expanding - to the 7th Floor. Nearly 500,000 people visit the old Texas School Book Depository every year, and more room is needed for exhibits. Plans also call for a Library and Archives, Conference Areas, and a 180-seat classroom.

Journalist High Sidey was in the motorcade, and he attended today's press conference/reception at the 7th Floor. He shared his memories of the many years he covered JFK - JFK as a Senator, and as a President.

"In addition to the glamour - the very handsome man and his wife - I think one of the reasons that his image is sustained is the "substance" of the man. He read 1,200 words a minute - history books - ten books a week - biography, history..."

Sidey has been to Dallas several times since 1963, but hadn't revisited the assassination site until today. He said he found the Sixth Floor exhibit, "consumating."

Later this week: Mary Ferrell's 5 Steps to being a REAL assassination researcher, my time with assassination witness Ed Hoffman, dinner - and a evening tour of Dealey plaza - with JFK/Lancer's Debra Conway and Tom Jones...and more.

I had the pleasure of JFK/Lancer's Debra Conway's company Monday night - and viewed Dealey Plaza for my first time with her as my "guide." A nighttime view is an extraordinary experience.

Nonsensical infighting among JFK assassination research groups and information providers really detracts from the case at hand. If you thought the flaming in the conspiracy forums was bad, try listening to the bickering on the Grassy Knoll during commemoration ceremonies.

"The younger [visitors to Dealey] are really interested. It turns off the ones who are old enough to remember..." says Kim Dobbs, whose husband hawks 10th-generation bootleg JFK autopsy photos in Dealey Plaza.

I was told the crowd was smaller this year than last. Three local television media crews were on hand. Business at The Sixth Floor Museum was brisk.

Ed Hoffman was a hit with visitors and the media. He deserves to be. His story - which, despite contrary information - remains unchanged since 1963. His manuscript, "Eyewitness" (JFK/Lancer Publications, 332 NE 5th Street, Grand Praire TX 75050, $14.95. 1995) is fascinating reading. A must-have for your bookshelf. When you call JFK/Lancer at 972/264-2007 to order, ask if they have any autographed copies left. IF YOU SIGN, you will want a copy of the video of Ed's story - also available from JFK/Lancer.

Robert Groden's latest work-in-progress is tentatively entitled "The Assassination Films." We were shown a working copy, which included over 15 films that were shot in and around Dealey Plaza on 11/22/63. New to the fray is Patsy Paschall's film, which hasn't been seen in such a public forum before now. Hopefully, we might all be seeing fairly soon. She spoke to our group at the Paramount Hotel - and gave us her story. When asked if she had possession of the original print of her film, she stated rather emphatically that she did.

When she originally took the file to her attorney, it is alleged that she was advised "nothing of importance" appears on it. Hence, it was, essentially, buried from public consumption for 32 years. She heavily stipulated its use by the HCSA - yet that is the approximate time Robert Groden acquired the copy we saw last night. Movement behind the picket fence is clearly visible with the unaided eye after Patsy panned from the motorcade entering the underpass back to the Knoll area - even without any film enhancement.

Patsy's perspective provided first-hand insight of the mood and tenor of the 60s. She seemed sincere and concerned that the truth be known.

But thirty-two years' wait? ... And a quarter of a million dollars?

I enjoyed a private 10-15 minutes with Robert Grodon this morning. "It's hard to celebrate your birthday when it falls on November 22..." Robert is fifty today. He has even more reason not be in a celebrative state of mind. The financial strain of his research, coupled with his wife's poor health, don't show in his public persona - he is most gracious with what could be spent as "personal time" this week.

Ten Dallas policemen are currently on the force who were employed by Dallas PD in 1963. Then motorcycle officer Bobby Hargis is approachable, and will become sullen before your eyes as he relates his story.

He was on the force only a week when he was given the assignment to flank JFK's limo - left side, ten feet behind.

"I'm the only one living who was beside the car. When [JFK] was shot in the head, it splashed up, and I ran into all that brain matter and all that. It came up and down, all over my uniform."

A few minutes later, while at the TSBD, a co-worker leaned forward and flicked something off Hargis' upper lip.

"It was a piece of the President," Hargis said, as his gaze clouds through tearing eyes.

FOR THOSE WHO HAVE NOT PERSONALLY VISITIED DEALEY PLAZA

(from a first-timer myself)

1. You will utter the phrases "No way!" and "You gotta be kidding!" several times to yourself as you stand at the corner of Houston and Elm and view the Sixth Floor window and estimating WC trajectories.

2. You will be amazed at the closeness/proximity/ intimacy of Dealey Plaza. Especially as you experience the distance involved between the picket fence and Elm Street. The phrase "turkey shoot" will come to mind.

3. After spending adequate time exploring the Plaza the first time, you will immediately run back to your hotel room to re-read portions of the texts/ manuscripts/photographs you brought with you. Debra Conway forewarned me of this "first-timer's phenomenom." You have just acquired a new perspective of the site - which makes an incredible amount of difference when interpreting the data you've gathered and read. You will not sleep a lot - you will be re-reading.

3. You will be dismayed by the "hawkers" pushing their materials at you. Unfortunately, vultures are a part of Mother Nature's natural scheme of things.

4. You will be tempted to stand atop Zapruder's perch. It's OK. You're not being morbid. You're viewing the scene to a kill.

5. Walk across the tracks. See the "Hoffmann" billboard. Line yourself up with his line-of-sight - realizing that the current billboard has been raised several feet since 1963. Could he have seen what he claims?

6. You will be tempted to remove profane graffiti from the picket fence. You WILL remove several tacky leaflets posted every three feet - and dispose of them in the appropriate Dallas maintenance receptacles.

7. You will be tempted to take the 2-hour tour conducted by "JFK - The Tour" beginning at 1:00pm daily in front of 400 Elm Street. You'll think to yourself, "Naw, it's too touristy." Go ahead and take it. Although Nelson might come to different conclusions than you, the tour does take you on the entire motorcade route, Oswald's alleged route from the TSBD, Tippit's killer's route, Jack Ruby's walk down the ramp, and several other sites of interest. Nelson is sincere in his effort to do his part in adding to your experience while in Dallas for the first time. [NOTE: This tour no longer exists...CB]

8. Schedule a minimum of three hours to visit The Sixth Floor Museum. You might not admit the fact that you spent three hours there in public conspiracy forums on Internet <g>, but the experience is valuable.

9. Walk around Dealey Plaza at night. Completely around it. View everything. Absorb. Don't intrude on the homeless' encampment under the Triple Overpass - but encircle the entire Plaza.